The Church of St. Peter “alla porta” (at the gate), so called because of its ancient location, on the sea shore and at the city gate. The present building (second half of the 16th century) replaces the pre-existing church destroyed in 1398, due to the struggles between the Guelphs and Ghibellines.

Andrea Ceresola, known as Il Vannone, and Giovanni Ponzello were the architects who designed the building, inspired by the Basilica dell’Assunta in Carignano. The raising of the temple allowed the construction of the rooms below, the sale of which helped to finance the work: an original architectural solution that made it known as “The Church above the shops”. Many of the shops below were occupied by the “benches” of the moneychangers. Hence the name “S. Pietro in Banchi”.

Inside, the white marble cladding is a beautiful example of harmony and classical balance. Valuable marbles of the high altar mensa and next to it the 18th century crucifix, which recent restoration has restored to its harmonious aesthetic form and intense expressiveness.

The Chapel of the Immaculate Conception

On the left is the splendid Chapel of the Immaculate Conception with a canvas by A. Semino and statues of St John the Baptist and St George (patron saints of the ancient Republic of Genoa) and St Roch and St Sebastian (invoked against the plague). The Chapel was built by the Republic of Genoa as a vow for the cessation of the plague in 1579, as the epigraph above the painting of the Virgin states. The city’s coat of arms (red cross on a white field) confirms the origin and civic character of the chapel.

The Hats of St John the Baptist

In the chapel on the right, dedicated to St John the Baptist, there is a fine painting of the martyrdom of the forerunner saint, patron saint of the city, by the Mannerist painter from Lucca Benedetto Brandimarte. On the sides are marble statues of St Stephen, St Elizabeth, St Zacharias and St John the Evangelist.

The interior of the dome has an octagonal base and the stuccoes of the apse dome are remarkable. They are considered Marcello Sparzo’s masterpiece: they represent moments of the Passion of Christ, the Holy Trinity and the handing over of the keys to St. Peter, the titular of the Church.

Saint Peter ‘at the door’ and the continuity of a history…

An ancient tradition, confirmed by Jacopo da Varagine, has it that the first evangelisers of the Ligurians, Nazarius and Celsus, arrived by sea in this area and began preaching the Gospel here. Also in continuity with this ‘missionary’ origin, in more recent years, until 1982, the church was entrusted to the Missionaries of the Consolata and Genoa was a place of departure for many evangelisers. In 1984 a group of friends founded the Centro Banchi and took care of its opening and activity as a “door to research and dialogue”.

A strong stimulus and almost a challenge is the centuries-old presence in the vicinity of St Peter’s Church, the ancient headquarters of Banco San Giorgio, the first world headquarters of the modern financial movement. The historical juxtaposition of the two temples – that of the “Christian Triune God” and that of the “God of money” – seems to want to continue the never-ending challenge between materialistic paganism and the integral vision of man.

In the chapel on the far right, a plaster statue (a very well-made kick for a bronze sepulchral casting) has been in place for several decades. Recovered and placed here as a significant reminder of the eternal confrontation mentioned above: that of solidarity love with the selfish love of the materialist system. A statue found and preserved “without hands” and responding to the prayer of an anonymous Flemish artist from the 15th century: “Christ has no hands, only our hands to do his works today”.

Peter, a fisherman from Galilee, therefore a suitable guardian for a city by the sea, which has always been open to all ethnic groups, cultures and religions, declares his conviction that “God does not give preference to persons, but welcomes those who fear him and practice justice, whatever their nation”. (Acts 10:34) 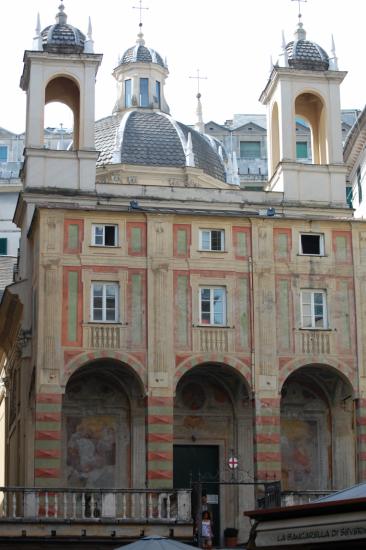